Requirements: Level 70 of the 2nd rebirth

1. What is Capture the Flag?
Capture the Flag is a new arena for your guild to establish your fame and honor. If you are interested in it, speak with the Guild Controller in Twin City (350,337) to learn more!

All guild members can talk to the Guild Controller from 21:00 to 22:00 to enter the CTF Arena and fight with their guild to capture the Flag of Honor. There is no level limitation for participants.

2. CTF Arena
After you enter the CTF Arena, you will find 3 unoccupied flag bases in the Capture the Flag arena. Attack the flag base to capture it for your guild. After your guild occupies a flag base, the location of the flag base will be marked with a yellow icon on the mini map. 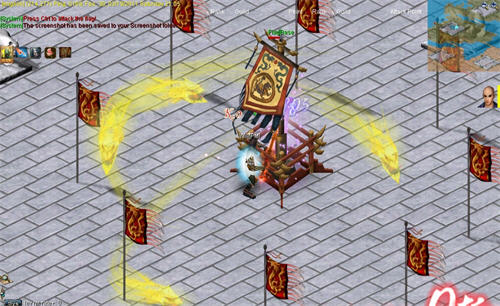 There are also some flags scattered around the arena. Seize a flag, then carry and plant it in the flag base your guild occupies within 60 seconds to gain points for your guild. You can jump, ride a horse, or use the acceleration skills in order to return to the flag base. Remember to avoid the members of the opposing guilds and find protection from your guild members! Once you are attacked by members of an opposing guild, you will lose the flag you are carrying! 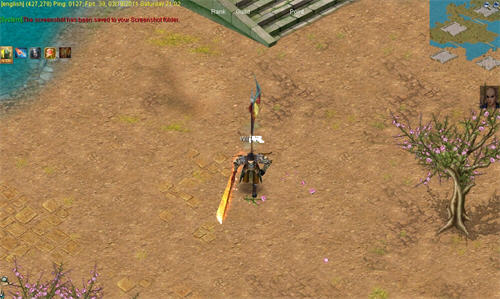 Carry the Flag back to the flag base and the flag you seized will be planted in the base, earning you some points for your guild! The guild with the highest points at the end will win the CTF contest! The top 8 guilds will also be ranked.

Flag carriers will be marked on the mini map, and the mark will move as the flag carrier moves. All players in the CTF Arena can see the location of the Flag Carrier, including your enemies. So, guild members should protect the flag carrier of your guild at all costs!

If you are killed during the Capture the Flag Contest, you will be revived in a Safe Zone. PKing is not allowed in the Safe Zone. Meanwhile, you can buy some necessary items there. You can also find the Guild Keeper to return to Twin City, if you want to quit. 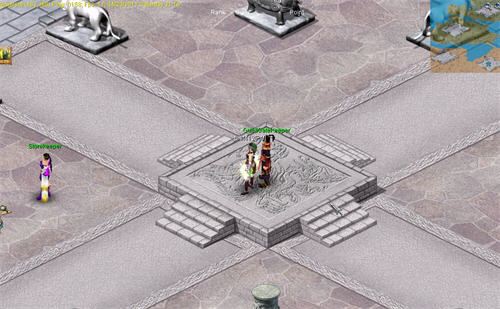 3. Rewards.
1. Rewards for Guild Members
Before the Contest is started, the Guild Leaders can set the rewards for the Capture the Flag Contest.

During the Capture the Flag Contest, Guild Leaders can also set or edit the reward for their guild members.

If none of the Guild members have Exploits (only have Guild Points), the reward will be given to a random Guild member. 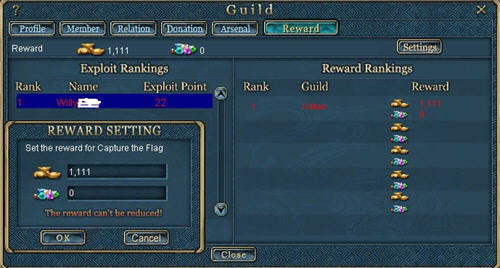 2. Rewards for Guilds
When the event is over, prizes will be automatically sent to the top 8 guilds as guild fund. The guild leaders and deputy leaders of the top 8 guilds do not need to claim the prizes from NPCs.

Here below are the rewards for the TOP 8 Guilds.

Requirements: Level 70 or higher of 2nd-Rebirth

Note: The Nobunaga’s Claw can only be blessed when you reborn as Ninja – Ninja combination at the first rebirth. Or, you can also use 5 Tortoise Gems at Wuxing Oven in market (178, 204) to bless it.

The mysterious Celestial Sage was secluded for a lot of years. Now he has returned with astounding Universal Concept! So many are eager to have their hands at the book that it creates great enthusiasm over the Universal Concept! 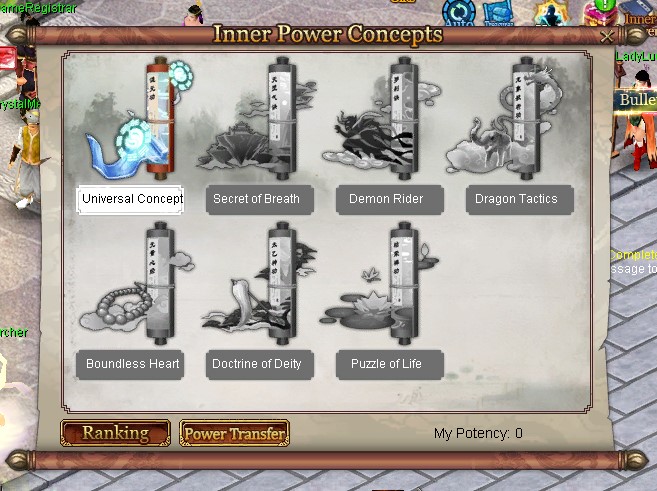 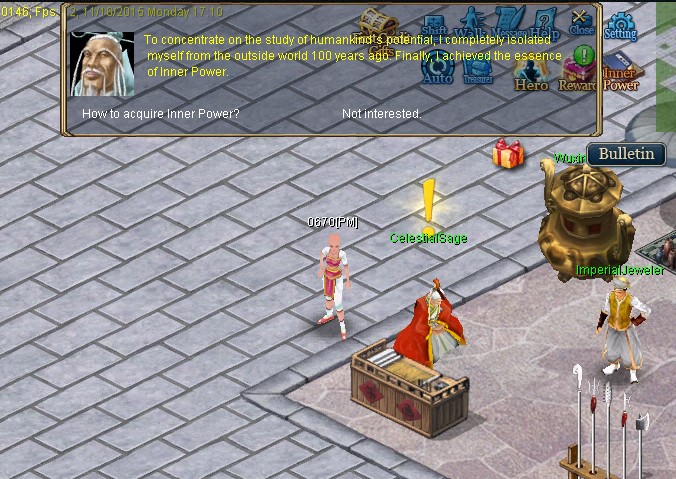 It’s destiny that we meet each other. So Celestial Sage will give something precious as a gift, the first half of Universal Concept, Universal Concept (A)! Right click on the book to acquire. 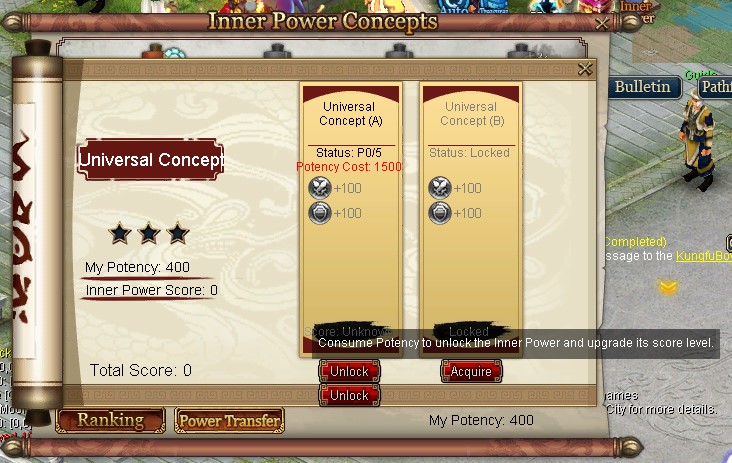 Then you could go on to click on the “Unlock” to improve Universal Concept (A) using Potency Points.

When you reach the highest level, you could click on “Perfect” to complete studying! 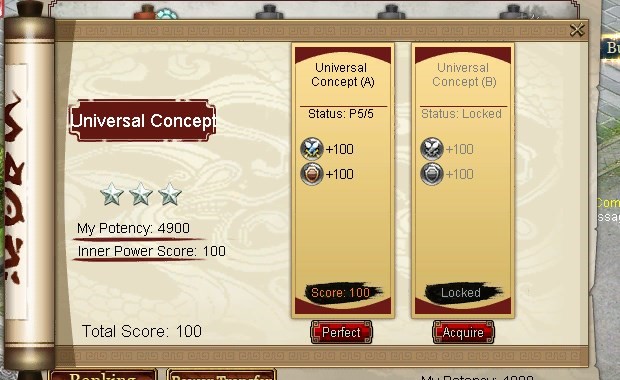 You are indeed talented! Now you can claim from Celestial Sage the next Inner Power book! 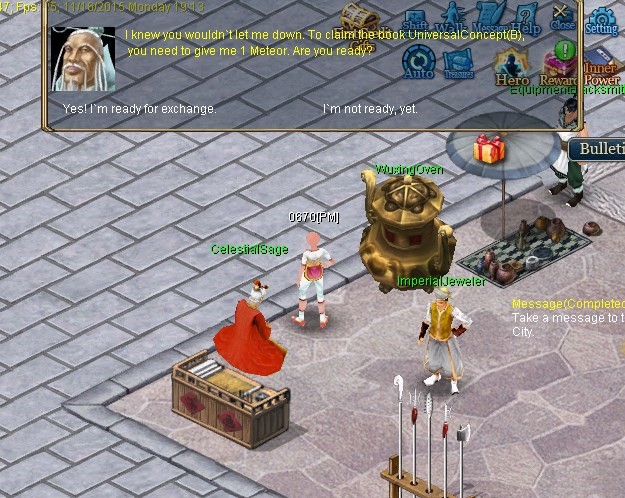 When you complete the whole Universal Concept and get attribute bonus! 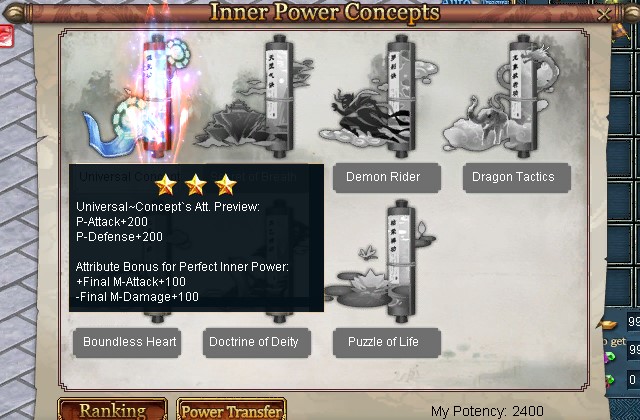 It’s said that a road of a thousand miles begins with one step. You need to stick to Inner Book and do not give up easily. It’s certain that you would be among the toughest! Bitcoin is a form of digital currency, created and held electronically. No one controls it. Bitcoins aren’t printed, like dollars or euros – they’re produced by people, and increasingly businesses, running computers all around the world, using software that solves mathematical problems.

It’s the first example of a growing category of money known as cryptocurrency.

What makes it different from normal currencies?

Bitcoin can be used to buy things electronically. In that sense, it’s like conventional dollars, euros, or yen, which are also traded digitally.

However, bitcoin’s most important characteristic, and the thing that makes it different to conventional money, is that it is decentralized. No single institution controls the bitcoin network. This puts some people at ease, because it means that a large bank can’t control their money.

Where to Buy and Sell Bitcoin 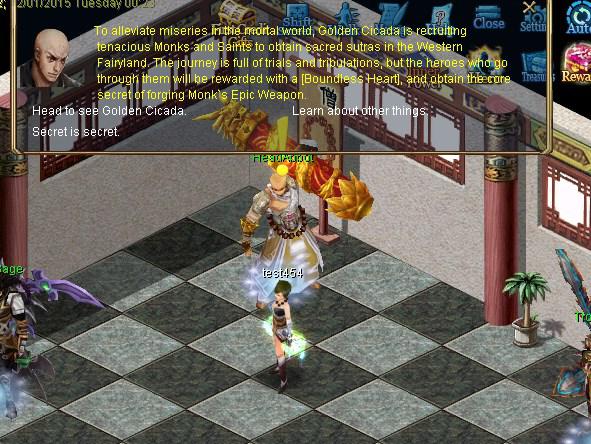 2. Pay a visit to Golden Cicada to learn about the method of making the Boundless Heart. There are 3 stages for you to achieve the goal: 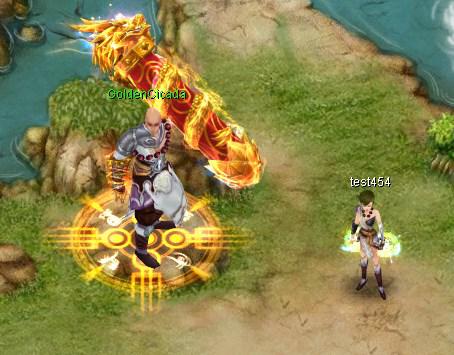 Stage 1: Submit 3 Red Flowers and 3 White Flowers to Fortune Arhat, and complete this trial to get a [Spiritual Gem]. 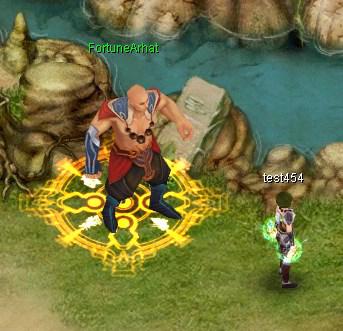 Note: If you failed to obtain a Spiritual Gem, you'll have to submit 3 Red Flowers and 3 White Flowers to Fortune Arhat again.

Stage 2: Submit [Spiritual Gem] to the Altar Cleanser, and remove distracting thoughts to get [Buddha’s Necklace]. 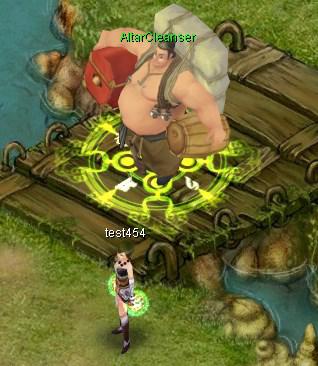 Note: If you failed to obtain a Buddha’s Necklace, you'll have to return to Fortune Arhat, and retry to obtain a Spiritual Gem again.

Stage 3: Submit [Buddha’s Necklace] to the Victory Buddha, and complete this trial to get a [Boundless Heart]. 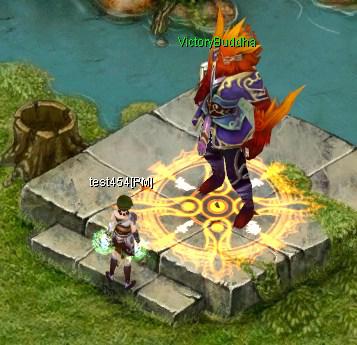 Note: If you failed to obtain a Boundless Heart, you'll have to return to Altar Cleanser, and retry to obtain a Buddha’s Necklace again.

3. Once you obtain a Boundless Heart, use it to reshape your right-handed Bond into an Epic Weapon of Monk.

4. If you want to reshape your left-handed Bond into Epic Weapon, you need to repeat the process form step 1 to step 3 again. 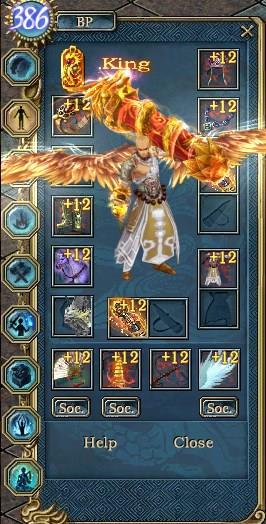 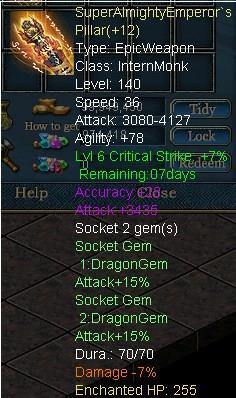 5. If you fail to obtain the key items in the Altar Cleanser and Victory Buddha, instead you'll receive Rosewood Incense. Rosewood Incense, you can exchange with the White Dragon (Oriental Fairyland 54,63) for fabulous rewards, such as an skill scroll, Chi Point, Free Courses and Protection Pill.

6. After obtaining Monk's Epic Weapon, Monks can use the skill scroll to learn exclusive skills. 2. After being teleported to the quest map talk to Arthur for details

and Stanley for support items (hp,mana..etc) 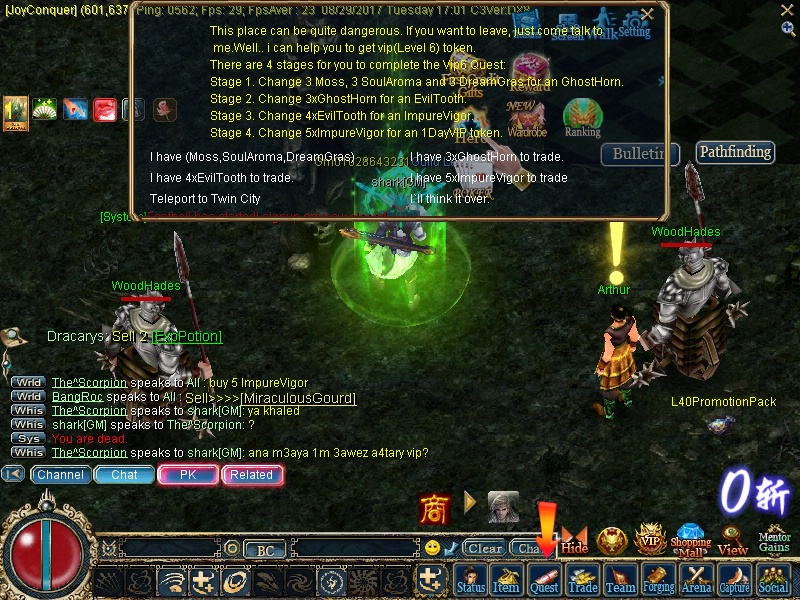 3. Now it's time for hunting down some monsters ! 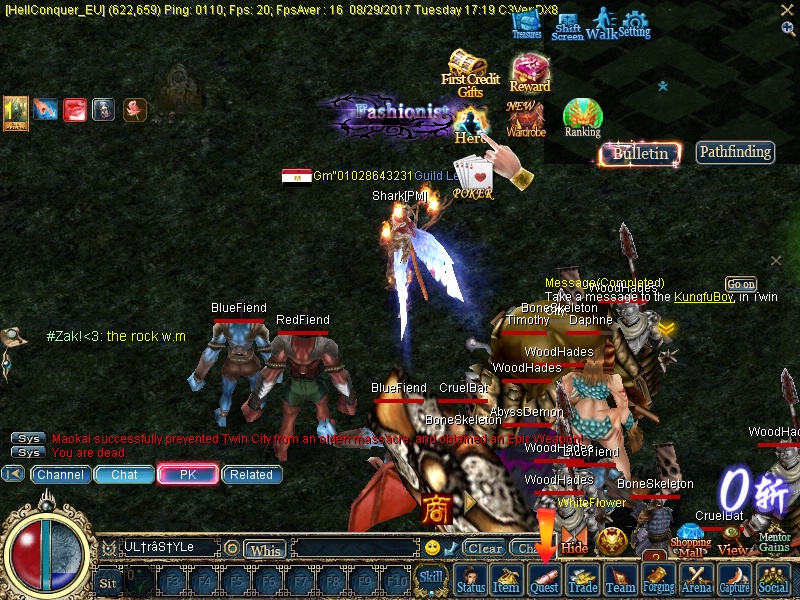 4. After collecting 180 (Moss,SoulAroma,DreamGrass) head back to Arthur

Exchange the following from Arthur:

5. After getting 5xImpureVigor you can now get your reward from Arthur.

1. PK is availabe in the quest region and all pk rules are applied ( pk points , Blue names ,...etc).

2. Items can be dropped if killed.